Showing posts from August, 2008
Show all

Now the Race Gets Interesting. . . 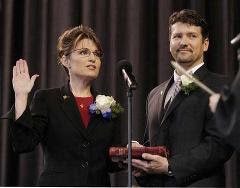 Although I don't agree 100% with Bulletproof Diction's analysis of Mr. Obama's speech, it's worth reading. I left a comment on his post on Senator Obama's speech, and that, along with McCain's surprising but brilliant choice of Sarah Palin as his running mate for vice president prompted me to write yet again, about this suddenly really interesting race for President of the United States.

I disagree with Bulletproof Diction's view that Bush's actions as President were 90% right (more like, 90% wrong). I don't think that Mr. Bush cares about nor can even relate to the average-income earning worker earning $55,000 a year or less. I don't think the current President really cares about the predatory lending by Big Banks and mortgage lending institutions which contributed to the recession the economy is in now. Plain and simple, I have my problems with Republicans, who are not noted for their social and economic reforms.

But I will not be voting for…
6 comments
Read more

History of the Jews...On the Moon

August 27, 2008
I received a very weird email from my cousins אי-שם in the Galil. I almost didn't read it ( it was one of those emails which are forwarded around the globe ad nauseum), but I started to, and it intrigued me, so I read it through to the end.
It almost felt like the Jewishversion ofthe 1980's science fiction movieBack to the Future.
The more things change, the more they remain the same. Some (but not all) spelling errors have been corrected by yours truly. Read on. . .


(Note: the author of this piece contacted me after having seen it on my blog. I never knowingly publish copyrighted material, so following is the author's information and link to the original work: "May We Please Have the Moon?"by Janet S. Tiger, copyright 11/15/2003, all rights reserved http://playsbyjanetstiger.com/Jews_on_Moon.html)
The Jews settled the moon in 2053, just about five years after the end of the Islamic Wars of the 40's, where the Middle East, and Israel, of course, had be…
6 comments
Read more

More on Obama & the DNC 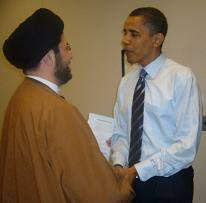 Found on the Gateway Pundit blog: "Barak Hussein O’bama meets with Imam Hassan QazwiniQazwini, head of the Islamic Center of America in Dearborn, is known to have close ties to Hizbollah.In 1998 the mosque hosted Nation of Islam leader Louis Farrakhan, who delivered a long hate-filled rant against Jews and Christians (and in praise of Saddam Hussein).The above photo was taken on May 14, 2008, at MacombCommunity College.O’bama was there as part of his quest to win the Democratic presidential nomination. O’bama had a private session with Qazwini. A mosque spokesman, Eide Alawan, confirmed that the meeting took place. During the meeting, the two are said to have discussed the Presidential election, the Arab-Israeli conflict, and the Iraq war.Who said what remains unknown."And I just found out in reading Frank Gaffney's article in the Jewish World Review, which is delivered into my inbox daily, that one of the opening invocations of the DNC on Sunday was given by Ingrid Mat…
Post a Comment
Read more

August 21, 2008
Leaving the high of participating in the Nefesh b’Nefesh JBlogger Convention, albeit cyberspace-illy, still behooves us to continue to try to make an impact on world events, beginning perhaps with local events (who was it who said, “think globally, act locally”?)

In perusing some of the many blogs whose authors I was familiar with or had just met in the conference chat room, I came across this piece about Senator Obama (about whom I’ve written before, here, here and here) by Daled Amos.

As I’ve said previously, there is more than meets the eye behind the charismatic facade (for some--not for all) of Mr. Barak Hussein Obama, beyond the flip-flop he committed at the AIPAC conference this pastJune.

This video hints just a little more about the hidden Obama; or do most Americans only care about the rhetoric?

Hey, why be so serious after all? Isn't it a little like, say, the State Fair? Or Disneyland? Or Hollywood? Let's just play the game and have a grand old time (just put your…
10 comments
Read more

August 20, 2008
I am still plastered high on the ceiling (please peel me off) from the first JBlogger’s convention yesterday in Yerushalayim.Yes, I had to get up at the unearthly hour of 7:00 a.m. my time in order to be dressed and ready at my ‘puter by 5:30 p.m.Israel time in my blonde sheitel and sunglasses disguise (hey, if Jameel can wear a yellow smiley face)—but it was worth it!Except for a (somewhat annoying) photo op by a politician (Bibi made a cameo appearance, and talked. And talked. And- until they had to stop him-), I thought this convention, after a few introductions and identity-and-purpose explanations, actually started to touch on something.One of the ideas with potential, was that Jewish bloggers may have more of an impact than they think, and another was a presentation, initially a bit boring but which gained momentum, indicating the need for better hasbara about Israel.I was present (virtually) in the chat room, and after fidgeting with my browser (Firefox couldn’t play it; had to…
15 comments
Read more

August 15, 2008
(There I go, posting erev Shabbat again; the challot are challot-ing, my husband's in the kitchen cooking, and I better get down there fast!)

I wanted somehow to connect this to my last post on Tu b'Av without detracting from the message there. In the end I decided it deserves a post of it's own.

In the back of our minds most of us acknowledge that there is a Creator or Power who engineered the world.
There are many paths one can choose to take on the journey of life; there are many hashkafot* you can have as to how and why we exist. Looking at it "rationally," some might say that religion is a construct of the human mind, and not really "real," as in 'physically' real.

Judaism teaches that there is much more than our physical world; that what we see around us, in essence, is the UN-real world, and that the World to Come is the real world, from whence we all came and to where we return, and must give an accounting. 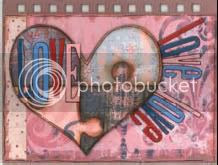 Isn't it strange that the celebrating-life holiday of Tu b'Av comes so closely after the mourning- death- and- destruction day of Tisha b'Av (yes, and I know that 15 comes after 9*) ?

But Tu b'Av is a little known, little celebrated holiday in the Jewish religion. It can pass one by almost unnoticed. Well, it's time we noticed it. This is what Rav Avraham Trugman of Ohr Chadash has to say about Tu b'Av:


Tu B’Av – the Holiday of Love

Our sages tell us there were no days as joyous in the Jewish calendar as Tu B’Av and Yom Kippur (Taanit 26b). Considering such a strong statement it is a wonder that Tu B’Av is perhaps the least known or appreciated of the holidays. In the last generation though, the significance of this day is slowly re-entering Jewish consciousness and observance. As described in the source above, this was a day when young women would borrow white clothing from each other and go out to the vineyards to sing and dance, and of course t…
1 comment
Read more

The Disaster of Disengagement - Video Says It All. . .

August 13, 2008
It is hard to imagine that three years have passed since the hitnatkut (called the "disengagement" in English, but which really was a summaryeviction) of the residents of the area known as Gush Katif, in Aza (the Gaza Strip). How a government can take a flourishing, producing community whose agricultural industries were self-sufficient and globally successful, evict them for no apparent reason (we'll go into that later) from their homes which they had basically built with their own hands and had been living in--some for as many as thirty years, with no definitive future plan for their living arrangements or livlihood on the books, and then demolish their homes and allow their greenhouses to turn into rubble, is mind-boggling, and absolutely irrational.

The s0-called 'reasons' for then PM Ariel Sharon's 'plan'- if there was one - were mainly to show the global community how pro-active Israel was to promote Peace with the Palestinians, which of course …
3 comments
Read more

Why We Still Have Tisha b'Av

August 08, 2008
My Toodles left this past Monday, consequently I don't need to force myself to be sad before Tisha b'Av.

But to some it might seem superfluous, still mourning for Jerusalem while it is the official capital of Israel, under Jewish jurisdiction. We forget, or don't want to think about the Jerusalem terror attacks over the years, most recently the two bulldozer/tractor attacks, and the Mercaz Harav terror attack on the same day as my son's wedding, this past March. After all, Jerusalem is in our hands, right?
Only three killed? Only 8 murdered? Only 13 wounded? In the great scheme of things the numbers don't sound like much. Or we breathe a sigh of relief: 'only 13 wounded, thank G-d!'

Truth is, Jerusalem is still not in our hands. The fact that there is an enemy living within it's city limits hell-bent on hurting us indicates that there still is a need to mourn on Tisha b'Av; the city is not whole yet, the Beit Hamikdash not rebuilt, the world has n…
4 comments
Read more
More posts