Giving Feels Good, Even on Your Birthday

My English birthday--to be technical, my Gregorian calendar birthday--was this past Wednesday.  Yes, yes, I always wake up to the dulcet tones of "this was the Day of Infamy," about the Japanese attack on Pearl Harbor.  Not a great way to start one's day, but there it is.  By the way, I am not that old, having been born...sometime after Pearl Harbor--in case you're wondering.  Old is a relative concept, anyway.  My little students in the Preschool where I teach, all of 3-51/2 years old, think I'm very old.  One sweet little 4 year old (the director's daughter, as a matter of fact) suggested that I might be as old as (gasp!) twenty-two.  I did not dissuade her from this notion...

So I was advised by my sister, who called to wish me a happy birthday (yes, I did call her on her birthday as well.  It was 5 days before mine) and is 4 years younger than I, to celebrate the entire month of December.  Sounds good, especially since, as per my previous post, the entire month is laden with s'machot,"joyful occasions," which include my birthday and my sister's, my youngest daughter's, and two out of seven grandchildren's.  Not bad, for the winter doldrums.

Credit where credit is due, one of the teachers in the school suggested that I get little chochkes for my students (whom she teaches in the morning) as little treats for my birthday.  It was a great idea, which I should have thought of myself--so I did it.

It's amazing what little things can make a small child happy, if it's given with excitement and mystery!  All I bought were little candy necklaces and watches, plus a little sevivon (Chanukah dreidel, or top), and had a 'grab bag' event where each child reached into a bag with his or her eyes closed.  It was great!

For the holiday of Chanukah, our staff is doing a "Mysterious Mattisyahu" (the Jewish equivalent of 'Secret Santa'), and giving anonymous gifts to each other, culminating in dinner out one night next week.  It feels good and creates a warm glow.

Just a little thing like giving to someone who doesn't necessarily expect anything, even if it's something small--makes you feel great.  We should carry this concept on into the rest of our lives, and not only for a holiday or birthday. 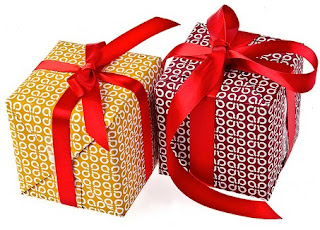