March 08, 2010
So it's been suggested by a fellow blogger (hat tip, Norma) that I write about what I find while cleaning for Pesach (anyway, that's my interpretation!)

Pesach cleaning often becomes a very emotional event for me--I'm not referring to the kitchen cabinets and dishes--they're just fine.

I'm referring to the bedroom closets (top, back shelves), the innards of my desk drawers, my metal free-standing, two-tiered desk inbox/outbox (which was piled high with...stuff), and various and sundry boxes which we haven't unpacked in six years, because I always want to look through everything and think about it. So I never get to it. And if I ever do get to some of it, I can never seem to get rid of anything: I always find a reason to save IT (whatever "IT" may be, at the time). I'm a packrat.

Interestingly enough, D. H. is just the opposite; at this stage in his life, he wants to downsize and throw everything out the window, except what will fit in his backpack. I wish I were like that; but I can't seem to 'let go.'

For example, yesterday as I was cleaning my desk and computer area (what's emotional about an office, you say?) I came across (in the aforementioned free-standing, two-tiered inbox/outbox) a photo of my older son, published in our local daily newspaper when he was twelve (twelve; he's 33 now, married with a child on the way, b'sha'ah tovah), cooking hot dogs--he learned from his father--at the local JCC Israel Independance Day celebration. 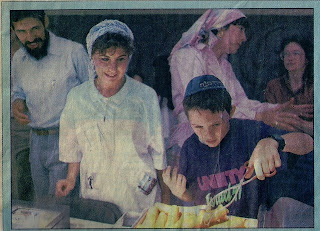 I had forgotten those times. The photo brought back memories. I sat there, reminiscing over times past when my kids were little (I hope they're not too turned off by this. Thank G-d, they are grown to be mature adults, doing important things, and making good lives for themselves; but I still miss my babies; time for grandkids).
I reminisced, cried a little, (okay, I admit it) and then I mustered up my courage and did the only thing I could do--the right thing: I scanned it in my HP printer/scanner and saved it in my 'baby-and-young-pics-of-kids' folder. I mean, what would you have done?

The rest of what I found (...including RAMBO's teudah* from her first year in high school at Yavneh in Israel in the Na'aleh* program, pics of four of my five kids one behind the other in height order, and pics of me and my sister as little girls, in a summer bungalow colony in NY) are stuff of another. . .post. . .

Batya said…
I knew you couldn't stop. How about blogging everyday to report what you've accomplished?
8:34 PM

Anonymous said…
Noooooooooo ... not every day. The house will NEVER get cleaned for Pesah....
9:28 PM

Lady-Light said…
Batya That's a great idea! That way, I'll have incentive to clean: there will be a blogging reward at the end of the day!

One of the added side benefits of making aliyah was that it forced us to go through all our stuff in order to decide what was worth schlepping. Of course, since then, we've B"H amassed even more stuff...
:-)
2:13 PM

Lady-Light said…
Mrs. S: Thank you for the compliment on the picture!
See, that's my problem: I don't want to get rid of anything, so how will we afford making aliyah and shipping all our stuff? And then, in an Israeli-sized flat, how the heck will we squeeze in all our...stuff (let alone amass more stuff!)