The Role of Women in Judaism

August 31, 2009
I am remiss: I meant to write about this months ago, and other issues got in the way. But this is such an important topic that I am writing about it now.

The issue of a woman's role in scholarship and Judaic ritual leadership, which has been 'whispered' about just under the surface for a while now, was raised aloud again and brought to the forefront recently.
This has happened particularly by the big news made by Rabbi Avi Weiss with his "Open Orthodoxy" idea, opening the door for women to have a leadership and public role in Jewish ritual observance, and also by Rabbi Yuval Sherlo, head of the Petach Tikva Hesder Yeshiva, when he created his "halachic document" enabling women to increase their participation in synagogue services, and by various other articles and blogs on the subject.
Here are some excerpts: from The Forward:

Rabbi Avi Weiss, a leading advocate for a more liberal Orthodoxy, and Sara Hurwitz, a protégé of Weiss, are now taking inquiries and applications for Yeshivat Maharat, a four-year program set to open this fall to train women as “full members of the Rabbinic Clergy,” according to an e-mail announcement. But they will not, as of yet, be called rabbis.

Rabbi Yuval Sherlo, head of the Petah Tikva hesder yeshiva, has recently formulated an elaborate halachic document aimed at facilitating the integration of women into prayer services and the life of the congregation, while striving for the maximum level of equality allowed by the Halacha.

In the plan, which was presented at a conference at the Lander Institute in Jerusalem Wednesday, Sherlo calls for renovating synagogues in order to adjust them to women's prayers, to encourage women to dance with the Torah scroll and allow orphaned women recite the kaddish prayer alongside men.

And from Elana Sztokman's blog in writing about 'Judaism in transition':

. . . As long as women do not “count”, not for minyan, not for kaddish, not as human beings, the message we sent to our daughter is still a lot of wishful thinking. As long as we continue to insist on gender difference, that only men can give a get, that men take a wife while women are “taken”, that only men are considered reliable witnesses, that men are rabbis while women are “maharats”, and so forth, then the equality line is still a bit of a fib. Sure, we’re working, but there is much work left to do, and this is where our energies belong.

I remember how, years ago, some of the Orthodox establishment berated the great Torah scholar Nechama Leibowitz (zikhrona li-vrakha), whose class I had the honor of attending.

Has the time for acceptance finally arrived? Can we do this? Can Orthodox Judaism incorporate a new philosophy of including women in active, public religious roles?

Another interesting response to this hot topic was written by a Chabad rabbi, Rabbi Levi Brackman. He acknowledges in his article on YNet News that some women, for spiritual, not feminist reasons, seek a deeper role in ritual observance:

But there are some who are not. Some women want a more active role in the synagogue—not because they are feminists but simply because they have a spiritual yearning for it. We in the West live in a society that has dispelled negative sexist and chauvinistic attitudes towards women. Whilst men and women are different, we now clearly recognize that men and women are equal.

But then he goes on to say that (emphasis mine):

Ultimately religious Jews who are committed to the traditional interpretation of Judaism must be guided in their spiritual worship by Jewish law as found in the Talmud and codified in the Shulchan Aruch. If there is room within the confines of Jewish law to allow greater female participation in the synagogue, women should not only be allowed to participate in that way they should be encouraged to do so.

That leaves this only a partially propped-open door. Because I don't think the Talmud nor the Shulchan Aruch are up for debate. . .yet.

Here is a JPost video referenced on Elena Sztokman's blog, about the Kolech conference in Jerusalem this past July (click on the JPost link to see this).

And here is just a small portion (see #1) of the agenda* at the Kolech conference (*for loose, partial English translation, see below) 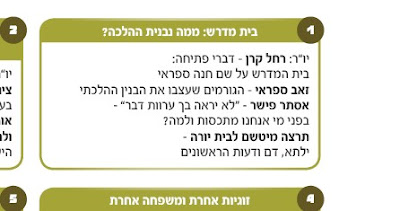 The subject is on the table.


*some opening lectures are:
1) the causes which designed the structure of halacha (Jewish law)
2) "your nakedness will not be exposed" - before whom do we cover ourselves up, and why?

Batya said…
Ironically, I think it was this past parshat shavua, which mentioned that it's forbidden for women to don men's clothes and the opposite, when it hit me that tallit and t'fillin must be included in that. Of course, that's my simple interpretation.

Last year, and G-d willing this year, too, I'll study in Matan. Most of the teachers, especially Tanach, are women, since men just don't know the subject as well. Women spend a proportionately larger time on it, while men concentrate on Gmorah.

I don't go for imitating men. I suffer no envy, as long as I'm not ignored, just because I'm a woman.

Biological men can't get pregnant. There are innate differences between the sexes, as I well know as I prepare to teach high school girls after more than a decade teaching boys. I do prefer teaching boys.

Every morning I'm totally sincere when I bless G-d for making me according to His will. And I'm happy to sit in shul knowing that the food is keeping warm on the platta and I don't have to learn the leining. I can just "meditate" on the words of the prayers and concentrate on G-d.

One of the keys in my philosphy of life is making the best of what we have.

Some of my feelings about this is probably due to the fact that I'm in Israel, and our synagogues and rabbis don't have the same roles as in the galut.
9:30 PM

Ari said…
Eema I think people totally miss the point when it comes to women rabbis and all that stuff. Women are on a higher spiritual level than men. They dont have the same rules as men because they are past all that. Men constantly need reminders so their thoughts dont "stray" so to speak. So therefore there is no need for a women Rabbi. It is not her duty to fill that position.
In our modern age when everyone wants equal rights I think we misinterpret these laws as sexist and degrading to women. On the contrary, this is actually completely the other way around.
A women should be proud that she isnt bound to mitzvot bound by time.
A woman that has become a "rabbi" has lowered her level to that of a man. Dont make too much sense does it? Jeudaism is getting twisted and turned and in the end we will be totally lost.
10:57 PM