July 24, 2014
So many blog posts have been written about this Gaza operation, Protective Edge, the response to the incessant rockets raining over the heads of Israeli civilians that I didn't add another one.  I listen to NPR reports which are all slanted against Israel, decrying the "disproportionate" number of Gazans killed versus the much smaller number (thank G-d) of Israelis killed.  The world is railing against Israel for killing "innocent" civilians.
But in fact, they are not "innocent civilians": by an overwhelming majority in a democratic election they voted in the bloody Jew-hating terrorist group Hamas into government.

Until now.  I know the Arab culture is depraved--forget the term "moral compass" - they are depraved. They don't know what morality is.
But I was shocked to see the level of depravity when I saw this on Facebook and then on Israel Matzav. Do you recognize it? 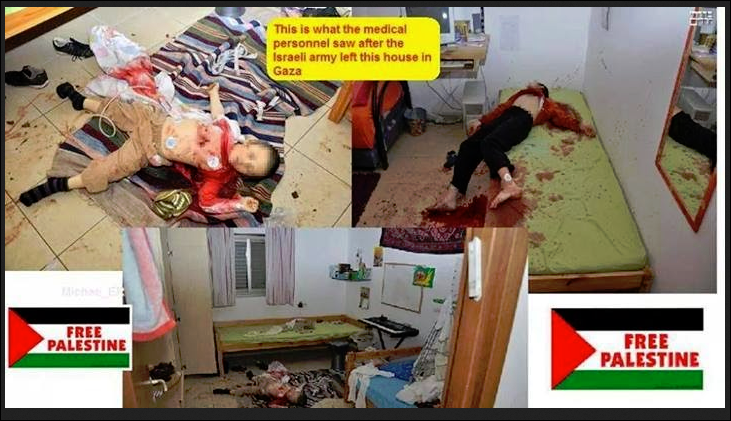 In case you don't, it is the photo of the Fogel family massacre in Itamar from March 2011. It is being used as pro-Palestinian propaganda, that this is what supposedly was found in a Gaza house whose occupants were murdered by Israeli troops.  It is an outright LIE.  It is actually a photo of some of the Fogel family members, massacred in their sleep (including their 3-month old baby, Hadas, not shown here).  The original video (removed by YouTube and Facebook) was embedded on Israel Matzav's blog in 2011.

Watch it. You need to know what depraved sub-humans we are dealing with. They are lower than animals. Animals are not barbaric: they kill to eat. Hamas and its supporters kill because they like to.

And that is why I am for Moshe Feiglin's long-term plan as a solution to the problem with Gaza.  And I think he's being too kind.

We should give Hamas and their supporters exactly what they love: Death.  Gaza needs to be flattened, and then annexed as part of sovereign Israel.  Then the rockets will stop.