Are We At a Crossroads? 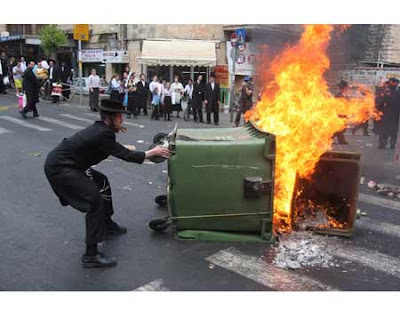 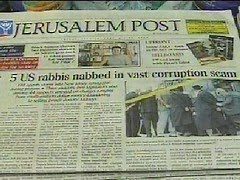 
I have been reading the recent news items about serious breaches of the law by prominent religious rabbis and raucous "demonstrations" (read: rioting) against other Jews by "religious" Haredim (Ultra-Orthodox) in Jerusalem, and my mind is reeling.

Instead of a public outcry from the Haredi leaders against the lawless rabbis, there is mostly silence. Unfortunately, there is also mainly silence from these leaders with regard to their own sect violently clashing with police and overturning and burning city dumpsters while strewing trash all over the streets and sidewalks, turning parts of Jerusalem into a veritable stinking garbage dump. This is at best a disgrace, and at worst, in my opinion a big chilul Hashem (desecration of G-d's name).

I said mainly silent, because except for one article I read in which a Haredi protester was interviewed. He stated that the violence is perpetrated by 'at risk' youth (my term), and is not a manifestation of the general Haredi community. Even if that is so, the Haredi community then has a responsibility to manage/help rehabilitate these youths.

The violence sometimes also extends to merely riding the buses in Jerusalem (on certain routes): the situation with "segregated buses" might be getting out of hand. On YNet Opinion an article was written entitled Going Too Far, in which the author "slams" the idea of segrated buses (I commented on that article), and I agree with him. One should be able to uphold one's religious beliefs, even some chumrot* as well, but not at the expense of others:

Not too long ago, I saw Sephardic Chief Rabbi Shlomo Amar attend an official ceremony in Jerusalem that featured a female singer. Yet he did not leave the site when she started singing, even though according to Orthodox Judaism men are generally not allowed to hear women sing.

As we can assume with certainty that the rabbi is familiar with this decree, and as we are completely certain that he is not en route to abandoning his religious beliefs, it’s clear that his decision to remain in the ceremony was made on the basis of a quick Jewish law decision: The honorable rabbi decided not to insult the female singer and the event’s organizers.

Of course, the author is attributing to Rabbi Amar these reasons for his actions (and I hope he is right) but if true, it demonstrates how one can be religious and still be a "mensch." Kol haKavod* Rabbi Amar, for upholding your interpretation of our laws, while respecting others in the process.

As far as the corrupt rabbis are concerned, every Rav (rabbi) in the U.S. should have been condemning them from the pulpit, as Rav Levi Brackman writes in his excellent article on Religious Jews Don't Launder Money. His introduction says it all:

Jews who take their religion seriously and truly fear God don’t cheat, and when they hear about others who do they are outraged and do all they can to put a stop to it.

I think that the Jewish people are at a crossroads of sorts, and we need to reinstate our wise body of lawgivers and a supreme judiciary-our Sanhedrin (read more about it here).

At this point in time there is no one Rav nor is there one overall judicial body or bet-din* accepted by all Jews, and times are tough. We need to make decisions for our future as a sovereign nation. We need to make formal distinctions between, and declarations of what is actually Divine law, and what is custom, or what are syagim* around the laws. We need to decide if Judaism is meant to be interpreted in an authoritarian manner and forced on all Jews, or implement a live-and-let-live philosophy towards secular Jews, while demonstrating by our own behavior what we believe to be the Jewish Way of Life.

As Rabbi Levi Brackman put it, there is no excuse for complacency. Our future may depend on it.

*Kol Hakavod: 'honor is due,' literally "all the honor..."
*chumrot: stringencies (in interpreting Jewish law)
*syagim: 'fences' around the law, to protect it.

*Copyright alert: No infringement of any text or graphic copyright is ever intended on this blog. If you own the copyright to any original image or document used for the creation of the graphics or information on this site, please contact the blog administrator with all pertinent info so that proper credit can be given. If you wish to have it removed from the site, just say the word; it shall be, ASAP.
at-risk youth chilul Hashem customs desecration of G-d's name God Haredim Jewish Jewish Law money laundering Rabbi Levi Brackman Rabbi Shlomo Amar Sephardic Torah Ultra-Orthodox YNet

Unknown said…
I completely agree with you! The Torah is wonderful, and I don't know how some fanatics can interpret it and do such horrible things in the name of the Law. I keep saying that I admire the Torah and not the actions of some so-called orthodox people, who hurt people's feelings and give such a bad name to the orthodox world. Go Lady Light!!!
7:25 AM

David Staum said…
I'm not sure that top-down authority, as represented by the Sanhedrin, is the answer. Part of the problem these days is that roshei yeshiva, and not local rabbis, aare considered the leaders. These roshei yeshiva don't have personal relationships with their constituents and have no idea what's going on on the ground. I think it's mlore important to have grass-roots communities be examples of what Judaism should be, not waiting for some cetral leadership to lay down the law. That's never happening.
7:57 PM

Baruch Eliezer said…
I’m appalled to think that an observant Jew (one that is shomrei kashrut, shomrei Shabbat, shomrei mitzvoth) thinks that it is acceptable to consider whether the Torah should be applied to all Jews. I can’t imagine how the thought process of Reform Judaism slipped into the consciousness of an observant Jew. We Jews at Sinai accepted the entire Torah. That’s right. All of us. So the entire Torah applies to all Jews, whether they want to live by it or not. Show me a Reform Sephardic Synagogue. Show me a Conservative Sephardic Synagogue. They don’t exist. Why has the Ashkenazim rewritten the Torah?
In one of your earlier posts you poopooed my comment about the Hareidim of Jerusalem standing up to the Secular government and protecting HASHEM’s Shabbat in the way they think is righteous. I praised them by acknowledging their “spirit of Pinchas”, which you seemed to miss the point entirely. Hashem praised Pinchas for killing the two and protecting HIS HOLY NAME.
As I mentioned in my e-mail to you, I think it is worth your wile to read the Schottenstein Edition of Talmud Bavli, the English edition, specifically 118b. Although to gain a greater perspective you should probably begin to read at daf 116. The Torah and our Sages speak directly to the link between Shabbat observance and the security of the nation. For someone who has lived in Eretz Yisrael, I would have thought you would have learned, but then again maybe you haven’t learned the connection between the two, since you’re content living in the punishment of the Diaspora.
I am appalled Lady Light, but your lack of understanding of the core issue, the protection of the sanctity of Shabbat. I am speechless and think you should apologize to all Jews and to Hashem for not speaking in favor of the protection of the sanctity of Shabbat.
I believe Tshuva is in order for all Jews to recognize our short comings, especially in the area of Shabbat observance.
10:39 PM

Lady-Light said…
Rachel: Thank you. I have many questions, however, about Judaism as it is practiced today, and also about the Torah. I am observant because it is a beautiful and (can be a) holy way of life, which has brought much good into the world. But my questions remain...
DYS: I hear what you are saying, but I don't know; I think that perhaps our people need a great leader of the likes of Moshe Rabbeinu (if not the Sanhedrin),or direct intervention by Ribono shel Olam, for us to find the right path. The 'crossroads' is mine, as well.
Baruch Eliezer: Years ago, I was much more fanatic, just as you are. I am older now and see things differently. Hopefully in a more mature way.
12:52 PM

Baruch Eliezer said…
Lady Light you're not that much older than I and I take the back handed insult of being immature and a finatic as a compliment. I'm sorry that your loss of youth has turned into a watered down, lukewarm at best, Jewish outlook.

August 07, 2017
This is my first post back on Tikkun Olam since April 23rd, 2015. It does not feel real. Why is it that we never think we will ever have a JOLT in our lives that will change the entire life course we have been traveling? We continue on, day by day, complacent, even in the face of serious illness--believing that what we are living is the only reality; that it is immutable, that it is PHYSICAL: you can touch it, feel it, and it will continue to be there for you tomorrow, and tomorrow, and tomorrow... But it isn't. And it won't.  Because the unthinkable can, and does, happen, in time. To everybody. As it happened to me, almost a year ago, on August 10, 2015, when my DH - Dear Husband, of 46 years, died. I am living in an Alternate Universe. Because the universe in which I was living all my life until now, is gone. I still want to slap myself in the face and wake myself up. It's a dream. A terrible nightmare.  It's a horror movie with a frightening ending, but I will
Read more