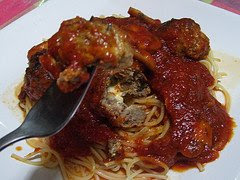 My grandchildren love to EAT. But for my grandson (the one with Down Syndrome), one of the most looked-forward-to activity of his day is eating meals. Don't get me wrong: he loves camp, and friends, and has "play dates" all the time.

So let's talk about play dates for a moment.
When I was a kid, we didn't have play dates; it's a modern invention. What we did was just go outside, and if our friends weren't 'out there,' we'd yell up to the window 'can Chayaleh come out to play?')
Today, kids have 'play dates.' You make arrangements a week in advance by calling up the kid's mother and arrange to have your kid go over to their house for a specific amount of time, say, five hours-to play; then the next week or so, that kid comes over to YOUR house for five hours or so.
It's like a business appointment. You formally plan it and put it on your calendar. I believe it is a result of living in the suburbs: everyone is in their own separate house, and nobody plays alone on the streets the way we did in the city, growing up in New York in an apartment complex (some of which were called "the projects.")

Play dates are also the result of the loss of innocent times, when it was actually safe for a child to go out into the streets; neighbors were always out and about, working or shopping, and watching everything; everyone on the block knew everyone else and looked out for each other. And there were much fewer dangerous sicko-types roaming the streets than there are today.

So my grandson has play dates. And he loves camp, swimming and family get-togethers.

But a major pleasure for him is planning meals and choosing foods he likes. Basically, our grandson 'planned' our first Shabbat dinner, and this is what it was: Chicken soup (his 6 year old sister is the one who loves the matzah balls), chicken, Ceasar Salad (sans cheese; although I think he calls every salad "Ceasar salad"), and for the main dish, what else but MEATBALLS and PUSGETTI.

We asked him, 'what about a vegetable?' He wasn't interested; we suggested several, and his parents said that the kids like cauliflower. Yeah? It was like pulling teeth to get them to eat it. We had to bribe them with dessert (you know the routine: 'after you eat your cauliflower, you can have a cookie and sorbet, but only AFTER you eat it).

I think meatballs and spaghetti is his all-time favorite dish. If he could, he would have it for breakfast, lunch AND supper in the same day. He would take it to camp in his camp lunch box. I think he would have it intravenously if he could. So, we complied: we (Saba* and I) made everything he asked for, since his sibs like at least some of what he chose, and in order to get dessert, they had to eat some chicken and meatballs (spaghetti, we didn't have to bribe them to eat. I wonder why...).
Dessert was pareve tastes-like-home-made chocolate chip cookies and strawberry sorbet. The whole shebang was a big hit.

So my grandson has already planned his Shabbat meals for when he gets here in two weeks (he is coming to visit us for a change!). Guess what he wants? You got it: meatballs and pusgetti. 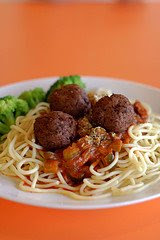 
*Copyright alert: No infringement of any text or graphic copyright is ever intended on this blog. If you own the copyright to any original image or document used for the creation of the graphics or information on this site, please contact the blog administrator with all pertinent info so that proper credit can be given. If you wish to have it removed from the site, just say the word; it shall be, ASAP.
Family Food grandchildren meatballs and spaghetti play dates

Karen (or the hostess with the mostess)!! said…
I love it..what great memories for everyone...enjoy the Denver visit with the grands!!
10:57 PM

Ye'he Sh'mey Raba Mevorach said…
Nice nice post. Wishing you lots of nachas from all the kinder and einiklach. Strike that. From all the yeladim and nechadim.
1:17 AM

Leora said…
Isn't Batya good? What a great post, and thanks for submitting to KCC. I love pusgetti. My favorite food.

Lady-Light said…
Mister Arnold Miyagi: Don't you know that this is an anonymous blog? You meant to say, you want to eat pusgetti with your corky.
But yes, he talks about you and Dodah Hellsbells all the time!
Hostess: Thank you, although only one grand is coming (the oldest); haven't been socializing much; too many things going on, and too exhausted...
Muse: You got it--I just send this post in to KCC. I thought I couldn't, because it didn't really have a recipe in it (is 'meatballs and pusgetti' a recipe?). But I done dood it: post was submitted, for what it's worth.
Ye'he: Thank you. Especially for the ילדים ונכדים part!
Leora: Ah, so you are hosting the next one (I figured it out, smart me. Or did I?)Good thing this day passed fast, if you know what I mean...
6:39 PM

Jewish Side of Babysitter said…
It's funny because my little sister always called it Pusgetti too!
10:31 AM

Lady-Light said…
JSofB: Yes, most little kids say "pusghetti;" it's easier to pronounce than 'S-P.'
Thank you for visiting.
1:58 PM

August 07, 2017
This is my first post back on Tikkun Olam since April 23rd, 2015. It does not feel real. Why is it that we never think we will ever have a JOLT in our lives that will change the entire life course we have been traveling? We continue on, day by day, complacent, even in the face of serious illness--believing that what we are living is the only reality; that it is immutable, that it is PHYSICAL: you can touch it, feel it, and it will continue to be there for you tomorrow, and tomorrow, and tomorrow... But it isn't. And it won't.  Because the unthinkable can, and does, happen, in time. To everybody. As it happened to me, almost a year ago, on August 10, 2015, when my DH - Dear Husband, of 46 years, died. I am living in an Alternate Universe. Because the universe in which I was living all my life until now, is gone. I still want to slap myself in the face and wake myself up. It's a dream. A terrible nightmare.  It's a horror movie with a frightening ending, but I will
Read more